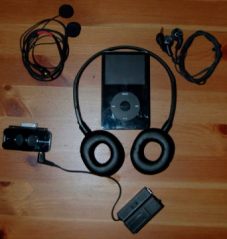 So that consists of:

The binaural headset I made actually works just as well as the bought one. However, the big advantage of the bought one is that it has matched microphones giving consistent recording levels.

The headphone restraint is a pair of headphones I bought from Currys yesterday and ripped the speakers out of. They’re just there to provide extra stability: the microphone earbuds fall out too easily with normal head movements. They also secure the cables against my head, preventing annoying cable noise.

I think I could still do with adding some insulation of some sort to cut down on wind noise.